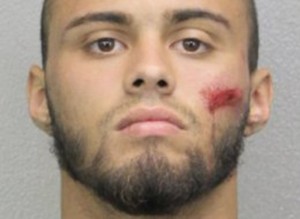 Is that an assault weapon in your pants, or are you just happy to see me?

The Sun-Sentinel reports that police in Fort Lauderdale, Florida, say a man tried to rob a pawn shop in broad daylight on Tuesday by stuffing an assault weapon down his pants.

“You allegedly went into that pawn shop and removed an AK-47 rifle on display and stuck it down your pants,” Hurley said, reading from an arrest report. “After a while, [you] pulled it out, put it back, then grabbed another assault rifle off another display [and] put that down your pants.”

The Associated Press reports that the owner of the shop stopped the alleged thief when he saw him limping out the door with the $850 rifle down the leg of his pants.

Although the circumstances of Alvarez’s arrest are silly, stolen guns are a serious threat to law enforcement.

Earlier this month, New York authorities cracked down on illegal firearms after investigators learned that an NYPD officer killed in the line of duty was shot with a revolver stolen from a Georgia pawn shop. Police also busted a high-volume gun trafficking ring this spring that allegedly ran guns into New York City from Maine, Connecticut and upstate New York.

“This is the way that criminals get guns that they use to murder police officers and murder other New Yorkers,” New York Attorney General Eric Schneiderman said at a press conference on May 6, after the crime ring bust. “People who do this for a living, we will pursue as aggressively as we can.”

Alvarez was held on $25,000 bond for grand theft and the violation of a domestic violence injunction.