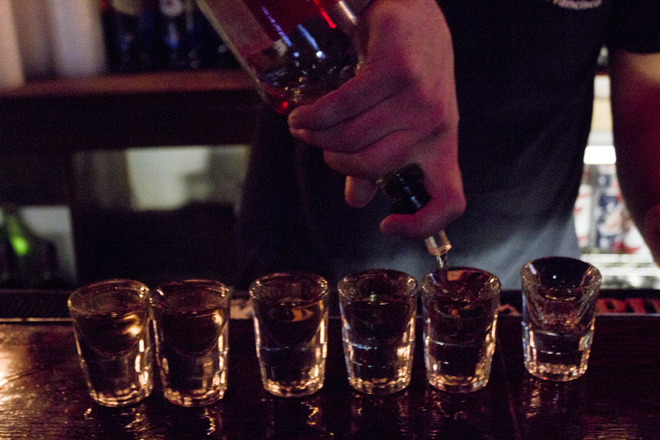 A French bartender was convicted of manslaughter on Wednesday after serving 56 shots to a customer who died the next day.

The customer, 56-year-old Renaud Prudhomme, downed the alcohol in October 2014 in an attempt to beat the establishment’s record of 55 shots, which bartender Gilles Crepin says he kept written on a board in Le Starter, a bar in the French city of Clermont-Ferrand. A lawyer representing Prudhomme’s daughter contends Crepin encouraged the dangerous stunt, and should be responsible for the consequences, reports Agence France-Presse.

Prudhomme proceeded to down the first 30 shots of alcohol in about one minute, ultimately drinking a liter of booze, reports The Telegraph.

Following the drinking contest, Prudhomme’s daughter escorted him home, but had to take the inebriated man to a hospital when he went into cardiac arrest. He died the next day.

The court handed Crepin a four-month suspended sentence, and banned him from working in a bar for a year. His lawyer, Renaud Portejoie, told the BBC they intend to appeal the ruling.

“It’s a decision guided by emotion and the unconscious desire to set an example,” Portejoie said. “We can’t ask every customer who buys alcohol to present their medical certificates.”