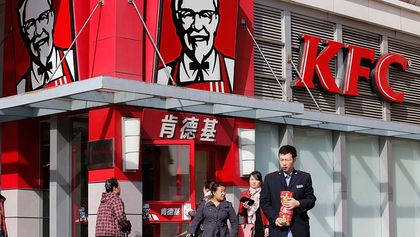 KFC doesn’t feed China with a small army of eight-legged chickens. And if you say it does, the fast food chain might just take you to court.

The fried chicken giant announced Monday it has filed suit against three companies in China, accusing the competitors of starting a rumor campaign questioning the quality of the restaurant’s ingredients. Among the more pernicious rumors: KFC’s chickens have eight legs and six wings.

The suit alleges Chen An Zhi Chenggong Culture Communications Ltd., Wei Lu Kuang Technology and Ling Dian Technology deliberately misled consumers by posting photos and articles online. KFC has asked for 1.5 million yuan (around $242,000) and apologies from each company, as well as for them to immediately cease spreading the misinformation, The Associated Press reports.

KFC’s actions come as the Chinese government itself attempts to crack down on what it calls “online rumors,” threatening people behind widely-spread online posts with up to three years in jail.

KFC is China’s biggest restaurant operator, with the country accounting for nearly half of its revenue. Rumors gained particular traction there due to fears over food safety in general, The Wall Street Journal reports, and helped contribute to a 9 percent decline in net revenue for KFC’s corporate parent, Yum Brands, in the first fiscal quarter of this year compared to a year earlier.