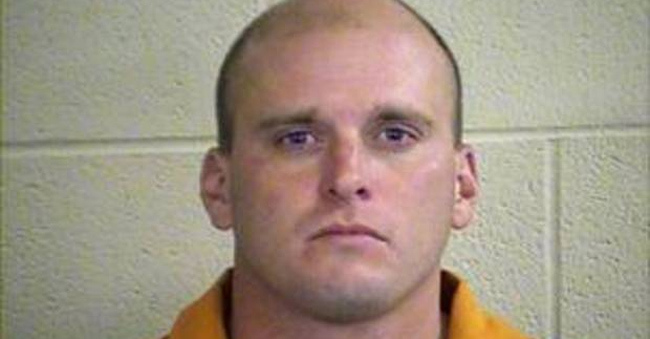 Last year we brought you the shocking/terrible/kinda funny story of a man who killed his stepfather with an Atomic Wedgie. For all the non-nerds out there who weren’t on the receiving end of these things, an Atomic Wedgie is a wedgie so intense the underwear gets pulled over the victim’s head. As they say, it’s all fun and games until someone gets hurt. And in this case, Brad Lee Davis didn’t just hurt his stepfather, Denver Lee St. Clair, with the move… he killed him.

Now Davis has pleaded guilty to first-degree manslaughter. From the Oklahoman:

Brad Lee Davis, 34, admitted he killed his stepfather on Dec. 21, 2013, “in the heat of passion while defending myself in a fight that got out of hand and went too far.” The victim, Denver Lee St. Clair, 58, died when the elastic band of his torn, blue underwear was pulled over his head and ended up tightly against the front of his neck, cutting off his air, the doctor who did the autopsy reported.
…
In an interview the next day, he told one investigator he gave his stepfather an Atomic Wedgie after he knocked his stepfather out and the fight was over, according to testimony at the preliminary hearing. However, in an interview 10 days later, he told another investigator he gave his stepfather the wedgie while they were fighting and then he knocked his stepfather out.

He told investigators the two fought because St. Clair was calling him and his mother worthless. St. Clair had filed for divorce in September.

Prosecutors sought to charge Davis with first-degree murder, and had presented evidence, including texts to a friend, where he said he was “fixing to mess Denver up.” There were also cell-phone pictures of his stepfather on the floor before and after the wedgie. But after much legal wrangling, a plea deal was reached where Davis pleaded guilty to first-degree manslaughter. The minimum punishment for that is four years. Prosecutors are still asking for a sentence more in line with their original charge: 35 years.

So yeah. Funny story… until it sinks in that someone is dead and another person’s life is ruined. Let this remind you that we’re all just fragile sacks of meat, and maybe — just maybe — Atomic Wedgies shouldn’t be performed on unconscious people over the age of 50.