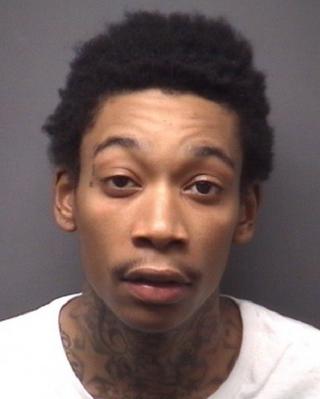 Wiz Khalifa could care less who knows he is an avid weed smoker. The 22-year-old Pittsburgh rapper often boast publicly about the $10,000 he spends on marijuana every month. In the same spirit, Wiz Khalifa left a trail of weed oder from his tour bus to back stage of East Carolina University, where Khalifa performed earlier in the evening. The stench was so strong the”Black and Yellow” MC tipped off the authorities who eventually arrested the rapper and charged him and nine members of his entourage for possessing 60 grams of marijuana, the equivalent of 2 ounces.

Wiz Khalifa was booked into the jail at around 1:30 a.m. He posted $300,000 bail and was released from detention at around 8 along with one other unnamed member of his entourage. He was charged with a felony count of trafficking in marijuana, a felony count of maintaining a dwelling/vehicle/place for sale or storage of marijuana and one misdemeanor charge of possession of drug paraphernalia.

Lets see if Wiz continues to snitch on himself after this incident. No word yet on the fate of the other eight members of his entourage.