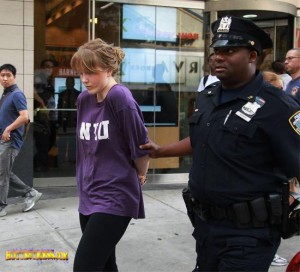 Here is a photo that shows Caroline Giuliani moments after she was busted for shoplifting $100 worth of cosmetics at Sephora in NYC. She was locked in handcuffs and walked to a waiting squad car yesterday.  As reported earlier she was issued a ticket and released.

Why is Rudy Giuliani’s 20-year-old daughter stealing.  It looks like the brutal recession is extending its tentacles far and wide.  Even into the rich right wing can get hood in hard times.

Law enforcement sources tell us that the former mayor’s 20-year old daughter is getting a desk appearance ticket for “petit larceny.”

Caroline was arrested earlier today at a Manhattan Sephora after she was seen allegedly putting 5 cosmetic items worth more than $100 in her pocket.  We’re told store security called cops after seeing her on security cameras.