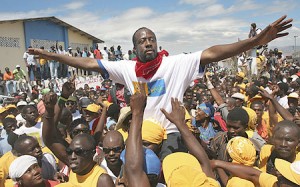 According to AP News:

Singer Wyclef Jean is about to announce his candidacy for president of earthquake-ravaged Haiti, the former head of the country’s Chamber of Deputies said Tuesday.

Former Deputy Pierre Eric Jean-Jacques told The Associated Press that the hip hop artist will run as part of his coalition in the Nov. 28 election.

Spokeswoman Cindy Tanenbaum will not confirm that Wyclef will announce his bid for the Haitian presidency, bus she said the singer would make an announcement Thursday night in Haiti.

There are some questions surrounding Jean’s qualifications for office. He must prove he has lived in Haiti for five consecutive years, own property and have no other citizenship but Haitian.  Its not uncommon for Haitian officials to make special exceptions for certain people though.