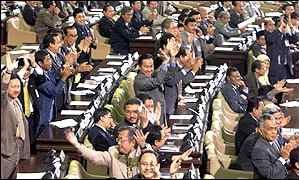 Witnesses say they were able to watch to the video for about 10 minutes before security guards were able to shut down the computers.