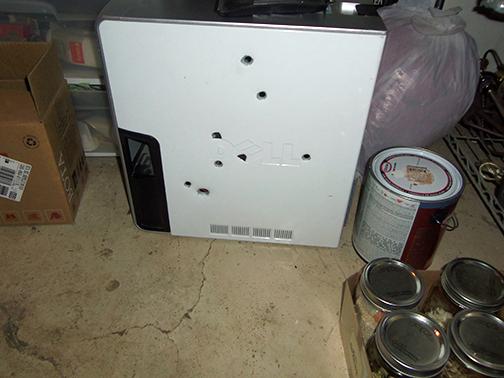 It’s the “Dirty Harry” version of tech support. A Colorado Springs man was hit with a municipal violation after he ended a long-running battle with an uncooperative computer by blasting it eight times with a handgun Monday, police said.

Lucas Hinch, 37, was given a violation for discharging a weapon inside city limits, police said in a report titled, “Man Kills His Computer.”

The police report said that Hinch “was fed up with fighting his computer for the last several months” and shot it in a back alley behind his home just before 7 p.m., “effectively disabling it.”

“He did tell us he thought it was okay because we are an open carry state,” Buckley said. But it is illegal in the city limits to discharge a firearm unless one is protecting life or property, she said. The violation would most likely result in a fine, Buckley said.

“You have to keep that balance whenever you’re working with social media,” Buckley said. “Sometimes when you have things that happen such as this, we like to think we can have a sense of humor, too.”